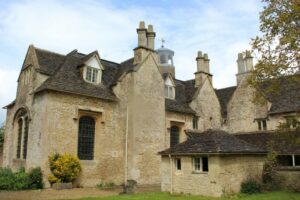 As is often the case, we kick off a new year with plenty of foul weather. With driving rain and ferocious winds come leaking roofs. We closed the business for just four days over the Christmas break, and 90% of the messages left while we were away and the calls now coming in are about roof leaks.

After a sustained period of high rain and strong winds, the most common cause of a roof leak is the chimney stack. There are various reasons for this, depending on whether you own a newly built property or an older house.

Leaking chimneys are in fact a very modern issue created by the introduction of radiators, as in the past most houses would have had a fire blazing in their grate, heating up the chimney stack and evaporating the water before it could ever become a problem. The addition of flue liners has also added to the probability of leaking chimneys as they isolate the heat from the flue.

How chimneys are built

The walls of a house are generally double skinned, with either a rubble infill or a cavity. The reason for this double skin is so that the water hitting the outside wall doesn’t make it into the inside wall (as well as insulating the inner skin).

However, a chimney stack is a single layer wall, so when we get driving rain, the bricks or stone of this wall become saturated and therefore porous. Water will then start to leak through wherever there is a fixing to this single wall, such as a rafter, pole plate or ceiling. This is when you will start to see your interior plastered walls developing damp patches.

What to do when your roof leaks

If you have a chimney that’s causing a roof leak, the best advise we can give is to just ride it out. When the weather improves, the water will dry up. We do recommend that you monitor the water spread by drawing a pencil line around the damp mark, if it gets worse, then contact a roofer.

Some more unscrupulous builders may tell you that you need to replace your chimney leadwork or the whole chimney stack knocked down and rebuilt, this is often not the case.

How to prevent leaking chimneys

You can have these trays retro fitted to your chimney, however to do this your whole stack would need to be taken down and be rebuilt. Some less discerning stonemasons may fail to fit new chimneys with these vital trays. If you are getting a new chimney stack built, insist on there being two lead trays fitted, this may well save you a lot of leaking water induced stress in the future.

If you live in a newly built property and your chimney is the cause of your roofing leak, this could be because the fibre glass chimney fitted by your builder or property developer has been installed incorrectly. If you believe this to be the case, you need to go back to the construction company and insist they reinstall it properly at their own expense.

The best way to do this is via the National House-Building Council (NHBC), who provide all new property developments with insurance against building defects. The NHBC have a lot of influence on which building regulations are introduced, as it is in their best interests to reduce ongoing issues within the building sector.

To prevent a leaky roof, read our guide on how to assess your roof on a bi-annual basis.

Why use West Country Tiling

Roof leak repair is one of the many services we offer. If you have a leaking roof that needs attention from our experienced team, please get in touch on 01373 462 224 or by emailing us on info@westcountrytiling.com.